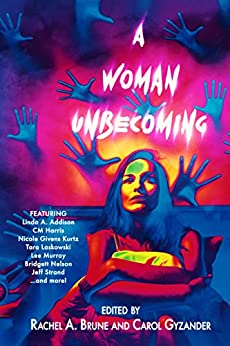 I am not a horror writer.

But sometimes rage takes hold and it needs, not only to be expressed through art, but for that art to contribute to change and justice. So when the opportunity appeared for me to contribute to the A WOMAN UNBECOMING anthology, I dug deep.

How deep? All the way back to 1993, to an angry little flash story I wrote as an entry for the first ever Gender Studies Writing Award at St. Lawrence University. It won. And it was first published in a limited run student ‘zine called THE WYRD Student Literary Magazine — which ran 300 photo-copied units and then vanished forever.

Most men I have shown it to have no idea what it’s about.

To a person, every woman I have shared it with has understood it from the first word.

Regardless, it infuriates me that it is more relevant now than it was when I wrote it 30 years ago.  So go buy this book, from the fabulous CRONE GIRLS PRESS, and help get the damn world back on a moral arc bending toward justice.