Okay – so this is normally, for spring and summer, where I post a Native Wildflower Photo on Wednesday, but to sometimes I have news that is just TOO AWESOME and needs sharing — and well, you’re getting that today instead.

So what happened? I made my FIRST PROFESSIONAL SALE!

Now, I know that probably has some of you scratching your heads. I mean, I’ve got 3 novels out in the world and short stories in anthologies, but the truth is, until now, I have never been paid a professional rate for anything thing I’ve written. Novels published through small presses rarely receive an advance (none of mine have), and most short stories sales for anthologies might sell  for enough to buy lunch or dinner. 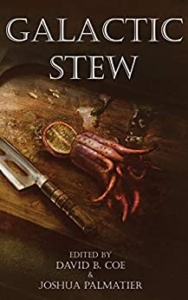 BUT there are a few places out there that pay what’s known as a professional rate — in this case $.08 per word! After months of waiting to hear, I can finally announce the sale of my short story “Blue” to the Galactic Stew anthology from Zombies Need Brains!  The book will be released this summer, and I’m so exited to be lined up side-by-side with some great authors.

This is extra thrilling because “Blue” is the first in a series of shorts/novellas that I am writing about a magical cafe set at the ultimate crossroads. It’s run by witches and it’s quite a special place!  I hope you’ll enjoy “Blue” and all the tales to follow.

Pre-order the paperback here, and the kindle version here.

Food is an essential part of life—not just for energy and exotic flavors, but as a unifier during social events, a focal point for establishing culture, and shared experience to put people at ease. In GALACTIC STEW, readers will sit down at the communal table and sup upon stories centered on food. Whether it’s a tense treaty negotiation over a full course meal or a trap devised by the fae to chain you to their realm, these stories are certain to be delectable. Come and savor these delicacies…and hope the taste doesn’t mask a deadly poison!

GALACTIC STEW
Edited by David B. Coe & Joshua B. Palmatier

Introduction by David B. Coe

“Blue” by Paige L. Christie
“My Brother’s Leaves” by Diana A. Hart
“Snow and Apples” by A.L. Tompkins
“Sense and Sensibility” by Esther Friesner
“The Silence That Consumes Us” by Derrick Boden
“The All Go Hungry Hash House” by Andy Duncan
“Pickled Roots and Peeled Shoots and a Bowl of Farflower Tea” by Chaz Brenchley
“Course of Blood” by Howard Andrew Jones
“A Real Llywelyn Scone” by Mike Jack Stoumbos
“Tender” by R.S. Belcher
“That Final Touch of Salt” by Mia Moss
“Alien Capers” by Gini Koch
“Magick on the Half Shell” by Db Jackson
“Apocalypse Chow” by Jason Palmatier
“Six Sandwiches to Place Inside a Pentagram to Summon Me to Your Presence” by Gabriela Santiago